PARIS — Pierre Soulages, 94, still paints every day on the floor of his atelier in the Latin Quarter here, raking heavy black pigment across large canvases in search of a particular onyx gleam that he has termed “outrenoir,” or beyond black. This color is his abstract art signature, similar to what blue was for Yves Klein or white for Robert Ryman.

“Black has been fundamental for me since childhood,” said Mr. Soulages, who, in an interview at his studio, shared a story from when he was a boy of 6 and his older sister found him drawing thick black lines in ink with a brush.

Mr. Soulages’s work can be found in museums around the world, including the Solomon R. Guggenheim Museum in New York and the Tate Gallery in London. In 2001, he became the first contemporary artist to be exhibited at the Hermitage, in St. Petersburg. “When the curator told me I was the only living artist in the collection, I said, ‘Thank you, I will try to stay that way,”’ Mr. Soulages said.

In December, Mr. Soulages will be 95, but he says he is not considering retirement, much less his legacy. “I only think about what I am going to do tomorrow,” he said in French. “And tomorrow, I want to paint.”

In the United States, where he is relatively little-known, his first exhibition in 10 years is now on view in a double show at the galleries of Dominique Lévy and Emmanuel Perrotin, which occupy the same building at 909 Madison Avenue, at 73rd Street.

Later this month, in his birthplace of Rodez, in the south of France, the Musée Soulages will open with a collection of 500 works donated by the artist, which are valued at 40 million euros, or $54.7 million. The museum, housed in a series of rusty black steel cubes, was designed by the Catalan architects RCR and contains a cafe by the Michelin three-star chef Michel Bras. Mr. Soulages insisted that Mr. Bras design a menu that art students could afford, and he also set aside a 5,000-square-foot space in the museum to exhibit work by a diverse range of artists.

Lévy Gorvy is honored to announce a solo exhibition of paintings by Pierre Soulages, to debut in Palm Beach on April 10. Pierre Soulages: Twenty Twenty-One will be the French master’s first exhibition in Florida, and his first in the […]
>>
Soulages. Malerei 1946-2019 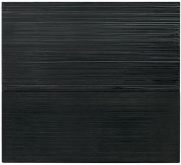