by Natalie ADAMSON, in « Art Bulletin of Victoria No. 41, Published by the
National Gallery of Victoria, Melbourne, Australia, 2002

In 1998, the National Gallery of Victoria acquired a large and magnificent canvas, Painting 202 x 143 cm, 6 november 1967, the inaugural purchase from the Eugénie Crawford Bequest.

………….
Pierre Soulages was born in Rodez, France, in 1919, and had begun to paint while a teenager. During the war he frequented the École des Beaux-Arts in Montpellier -though not as a formally enrolled student- and worked as a farmhand. Although in the pre-war years he had been largely ignorant of developments in abstract art, a meeting with Sonia Delaunay gave him an introduction and he created his first abstract works in 1946.
By 1947, the renaissance in French art symbolized by the Nouvelle École de Paris was already beginning to dissipate in the morass of Cold War political wrangling, together with heated debates among artists and art critics as to the merits of realism versus those of abstraction. The abstractionists were themselves mired in divisive discussion that saw the lyrically inclined artists pitted against those who favoured a geometric approach to abstraction, but the collective goal was never in doubt : to create a mode of painting free from reference to the exterior world. From the other « camp », painters dedicated to realism regarded the abstracts with deep suspicion, suspecting them of a coldly anti-humanist divorce from the necessary attachments to the world.
Between 1947 and 1953 -a period, leading to the death of Stalin, when aesthetics were directly aligned with political ideology- the Paris art world was driven by the figurative -abstract divide, and the École de Paris was called upon to declare its loyalties.

The rapid rise to fame of Soulages’s painting in the early 1950s is inextricable not only from the phoenix-like rebirth of the École de Paris but also from its redefinition as a « school » of abstract painters.
From his first one-man exhibition at Galerie Lydia Conti in 1949, Soulages was described by art critics as « the strongest and surest » of the new generation of painters. His work was defined by long, broad strokes of the brush, in black or dark brown, creating schematic, carved « signs » on a white ground. Those powerful canvases are devoid of any reference to nature, relying on their rhythmic partition of the surface and on the relationship between forms and the textures of the paint, to create what some critics described as « melodies » or « symphonies » of space. Charles Estienne, a well-known critic and promoter of abstraction, wrote that Soulages’s works contributed to abstract painting :
« a simple, virile, and almost rough drawing style, with dark, warm harmonies ; an innate feeling for the substance of the paint (pâte) and for the possibilities specitic to oil paintings and, most importantly perhaps, a tone that is at once both human and concrete. »
In 1952, Estienne featured Soulages in a series of Nouvelle École de Paris exhibitions, marking the long-awaited triumph of lyrical abstraction in the contemporary art scene.

Yet Soulages kept a deliberate distance from the political and aesthetic quibbling of the late 1940s, a stance that correlates with his earlier refusal to undertake formal Beaux-Arts training, and his antagonism to any kind of official teaching or support. Equally, he has always refused to entertain the suggestion that his work stands as a witness to his epoch, emphasizing the liberty of the artist which was a typical concern for the postwar existentialist generation.

…………….
In 1949, Soulages’s work was featured on the poster for the first show of French abstract art in Germany since the end of Nazism. This exhibition, Grosse Ausstellung französischer abstrakter Malerei, toured Germany’s larger cities in 1949. It included works by Soulages, Herbin, Bott, Del Marle, Domela, Kupka, Schneider and Hartung, and was the beginning of a vast campaign of international exposure during the 1950s where Soulages emblematized the freedom of expression touted as the hallmark of École de Paris painting. In 1953 Soulages contributed two paintings to the panorama titled French Painting Today, which toured Australian museums and was an auspicious beginning to his renown in this country : the collecting of his works by Australian museums began some four years later. In 1964, jointly with Hans Arp, Soulages carried off the prestigious Carnegie Prize, which was celebrated back home as the triumph of French independence and love of liberty over the market-driven machinations of the US. (…) On the putative competition between the so-called School of New-York and the Ecole de Paris, Soulages has expressed nothing but scorn: « I mistrust people who put the emphasis on their identity, because I find this a sign of fragility. When ne emphasizes identity it’s because one is afraid of not having one ».

………
A provincial upbringing had left him with memories of roughly menhirs and monumental ascetic Romanesque architecture. In his Montparnasse atelier in 1947, he began to seek in his painting a similarly architectural expression of stilled time and of the exploration of space through rhythmic structure:

It was in 1947 that I began to group my brush marks, which had always be large, (these lines having be coloured surfaces from the start), into a sign revealing itself in a single instant, abruptly. Narrative time, – the time in which the eye follows the line – was thus suppressed.. The duration of the line having disappeared, time was immobilized in a hieratic sign. In those signs that are made up of summary, direct brushstrokes, movement is no longer described, it becomes tension, potential movement – in other words, dynamism.

By around 1955, the sign tends to disappear and these brushstrokes come together and multiply; from their repetition, from the relationships then established between these almost similar forms, is born a rhythm, a rhythm of space.

……….
Soulages does not think of himself as a « gestural » painter : « What interests me is the trace of the gesture on the canvas. The gesture itself means little to me ». On the canvas the gesture becomes a contour, a length, a smoothness, a roughness, and it positions itself in relation to the other brushstrokes and to the nude ground : an « ensemble of relationships ». According to the artist, this complex of relationships is further extended beyond the canvas, to the painter himself, and to the viewer, in an intimate triangle.

In the Melbourne painting, the verticality of the canvas is held tautly in place by two horizontal struts of black, like two roofing beams. Breaking with an earlier attention to diagonals and straight lines, the two beans contain between them three fat black ovals, their liquidness sploshing beyond their horizontal confines. By its very nature the canvas is a « determined surface » and yet in no way do its physical dimensions delimits the space that Soulages has created throught the relationship of his forms, and, in this particular case, between colours.

The question of colour plagues Soulages. Addicted to the brutal simplicity of black and white since his childhood, he has exclaimed : « But, black is colour ! A colour ! An extremely violent colour !… Black, for me, is a very intense colour, more intense than yellow, and it brings with it reactions, violent relationships ». Nonetheless, the artist has gone through several phrases of intense experimentation with the addition of other colours to his black and white. The Melbourne painting belongs to a sequence of works made between 1967 and 1973 in which Soulages adds blue (other paintings use red), in a subtle game of opacity and transparency against the light-blocking black. In the National Gallery of Victoria’s picture, the blue washes downward from the top to the bottom of the canvas, decreasing in intensity from a dirty black-blue to a semi-transparent and watery veil, smudged and running at the borders. Using just one extra colour to create a stark contrast against the white ground, Soulages refuses to commit himself to painting colour harmonies. Even so, he has admitted that the colour adds a certain emotional tenor :« Yes ! But this calm and rather soft blue is worth as much for its colour as for what it contributes in terms of the lighting of the black and white nearby ». Without in the least imposing an expressive reading of the canvas, Soulages inducts the viewer into a journey where:
« it is necessary to consider, above all, the dimensions of the line, the breadth, the thickness, the medium, its transparency, its opacity, its placement within the canvas, its situation in relation to the other lines or painted marks ».

…………
Interestingly, it is highly probable that Mrs Crawford, given her longstanding association with the National Gallery of Victoria, would have seen Painting 202 x 143 cm, 6 November 1967 when it visited Melbourne as part of the 1969 exhibition Three Trends in Contemporary French Art. Whether or not, Eugénie Crawfort knew the picture, however, it is thanks to her personal passion for the French avant-garde that the National Gallery of Victoria now has in its collection a work by one of the best talents -though most reluctant members- of the École de Paris.

Lévy Gorvy is honored to announce a solo exhibition of paintings by Pierre Soulages, to debut in Palm Beach on April 10. Pierre Soulages: Twenty Twenty-One will be the French master’s first exhibition in Florida, and his first in the […]
>>
À la une
Soulages. Malerei 1946-2019 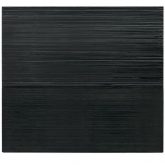